The British war Museum is better known as the Imperial war museum is based in London. It contains a large collection of items from all the major conflicts during the 20th and 21st centuries and provides not just entertainment for Military enthusiasts but all so important information and education for all of us.

The museum is quite large and it can be rather overwhelming, I found myself having to take many breaks during the day simply because the subject matter is obviously very heavy but also there is simply so much of it. A sad testimonial for the human race that there have been so many conflicts I suppose and this knowledge alone can prove to be very tiring very quickly.

But I don't want to put you off this museum, it is definitely a must see place to visit. There is so much to see and do, such as the walk through experiences, art gallery and amazing war items, some very personal too the soldiers too.

There are many exhibitions within the British War museum and as well as the First World War exhibition which I have already written about, there are three other main exhibitions I want to highlight.

Naturally there is a large exhibition space dedicated to the Second World War. As many of you know this war stretched across many different continents and as such at times it can feel like you are reading about three different wars, Europe, the dessert and Japan.

This exhibition contains the Blitz experience which is a visitor walk through experience of the night time bombings in London. This is a very popular exhibit and you do have to queue for about 10 minutes at times. During the experience you will have a guide who will walk you to a shelter where you will sit while the bombs fall around you, you will listen to the voices of people who would have been in the shelters at the time and experience their fear along with them.

After the all clear signal is given you are lead out to walk through the bombed dark streets and hear more dialogue about what you are seeing through the eyes of Londoners at the time.

The exhibition is broken up into sections, which cover subjects such as: 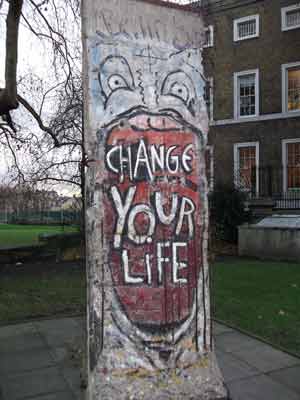 Sadly wars have raged somewhere in the world ever since the end of the second World War and this exhibition tries to cover as many of them as possible.

Again there are some harrowing scenes depicted in pictures and film. I found a short film showing burning bodies rather upsetting.

After the end of the war there was still a lot of mistrust between the east and the west and this developed into the cold war. Exhibits show examples of how this war and the threat of a nuclear bomb, affected everyone during their daily lives.

The cold war ended properly in 1989 with the end of communists in Europe and the very poignant pulling down of the Berlin wall. Part of the Berlin wall can be seen outside the British War Museum on the approach to the entrance.

If you find the idea of spies and espionage rather exciting you will love this exhibition. Everything you see in this exhibition is true and covers the real life spies of the British forces and its two main government departments MI5 and MI6.

Code breaking, training spies, invisible ink, sabotage devices and much more can be seen for the first time. The exhibition also covers the history of the highly trained special forces, such as the Special Air Service (SAS) and the Long Range Desert group.

There are some great short films to watch throughout this exhibition too, one below gives you a flavour of some of the things you can see in the Secret War exhibition.


Back to the top of this British war Museum Page