Dickens House In London is the last remaining house in which Charles Dickens the writer lived in. It is a beautiful Georgian house in a typically Georgian terrace in London and many of the houses original features remain. 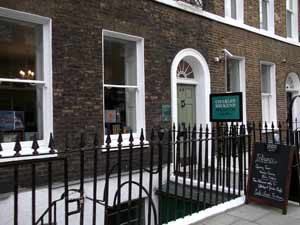 Charles Dickens and his Books are famous the world over and so this makes this London Museum practically popular with visitors. The house contains a large quantity of original items from personal objects belonging to Charles Dickens, furniture and original manuscripts of his work.

There are six rooms you can explore throughout the Dickens house museum which is over three floors which is accessed by stairs only.

The Dickens house museum has so much on display that it would be impossible to describe them all here. however to give you an idea of a few of the items on display I have picked out a few items to highlight.

Dickens Court Suit - Guest at Royal functions were required to wear ceremonial dress. Dickens wore his suit to several Royal functions including a private audience with the queen.

Gads Hill Clock - Situated in the ground floor hallway you will not fail to notice this rather imposing clock. It came from the only house that Dickens actually owned himself, Gads Hill Place.

8 Monthly parts of Nicolas Nickleby - This book was written entirely at Dickens house museum house in Doughty Street. As with many of his stories it was originally published in parts. It was published in 20 monthly sections of which the museum has 8 of these original parts on display.

Don't Miss the Nearby
Foundling Museum

I had no idea what to expect during my visit to the Dickens House museum and did expect it to be rather dull. well after all you are just walking around someone's house.

But I can honestly say that I thoroughly enjoyed my visit and this was mainly due to not only the fantastic items they have on display but also the welcoming way it was all laid out.

You enter the museum via the shop on the ground level. here you can buy items such as Dickens books and pictures, to the more whimsical items for children and adults alike.

You are then able to wander the house freely, moving from one room to another, up and down stairs and even out into the garden area. Every room is clearly marked as to what it was used for and laid out accordingly.

The rooms are quite small which is common with this type of house at the time, however the house is over three floors which means there was plenty to explore.

My particular favorite rooms were the main drawing room decorated in the Victorian style, with its luxurious furniture and its lavish red velvet draped curtains. The room is also home to a library of dickens books and a small piano / harpsichord.

My other favorite is probably rather unusual but I liked seeing the small washroom at the back of the house. This is where all the households washing would have been done and as such is furnished with a wash bath and all the appropriate tools for the job including a small boiler fire. I thought this was a nice touch to the house to have this also displayed, as it gave a sense of the Charles Dickens daily more mundane aspect to his life.

Every room in the house was a delight with original pieces of furniture, paintings of the writer and his wife and manuscripts and books in glass cases. There was plenty to see and grab your attention and any Dickens enthusiast would not be disappointed.

I would say that because the house is rather small, you may find it difficult sometimes to easily move around the house if there are a lot of visitors there at the same time.
My advice would be to take some time out and go and have a cup of tea in the charming little cafe at the back of the house which overlooks the small courtyard garden.