The Docklands Museum in London is situated close to the River Thames and is housed in an original tea warehouse.

Close by is the new Canary Wharf development which includes a large shopping complex and many good restaurants and bars. 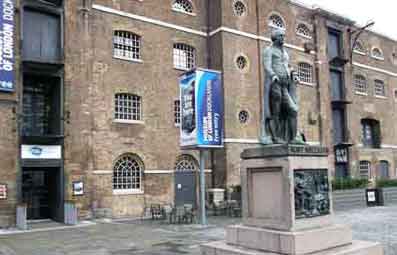 Admission to the Docklands Museum is FREE

The museum covers London's long history and relationship with the sea, the river Thames and the trading of goods.

It explores not only the Dock area of London but also the people that worked here throughout the many changes and difficult periods in history.

It is fair to say that London's Docks founded the city itself on its back grew into the influential city it is today. Of course its history like any other has its black moments too, such as it's associated with slavery, the fur trade and its almost total destruction during the bombing raids of the Second World War.

All of the galleries have their own feel and personality and so what one person may enjoy another may not. However I have picked out two of the galleries which I feel stand out and which will give you an idea of the docklands museum experience during your visit.

This is a walk through exhibit which is designed to give you a flavour of what life was like in the Docklands area of London during the 1800's.

The streets were narrow and dark, the shops small and spartan and the general feeling was one of poverty and overcrowding but with an upbeat heart amongst the people.

You walk along a dimly lit cobbled street with a couple of shop fronts and offices on either side. An open door invites you to come inside the small Public house where you can sit down and listen to the sounds of the drinkers in the bar.

Turn a corner and see small stone steps leading to even darker corners of the city where who knows what lurks.

A fun exhibit to walk through, even better if you go when it's quiet as it is rather spooky and you never know what you will find around the next corner.

This gallery was opened in 2007 to celebrate the abolition of the slave trade in Britain in 1807.

The displays and the sound recordings you can hear really do bring it home to you just how awful the trade in humans were and how the British exploited the peoples of African for their desire for sugar, rum and molasses.

The gallery also demonstrates modern issues around racism and how attitudes to race has and are continuing to change for the better.

An excellent gallery which give much food for thought.

There are eleven display areas within the museum covering the many developments and changes throughout the London docks History.

Shop - A small shop selling gifts and books can be found near the entrance.

Cafe - A cosy cafe with high backed armchairs can be enjoyed at the rear of the ground floor. Tea, coffee and cake a speciality.

Restaurant - For a more substantial meal there is an excellent restaurant which serves fresh seasonal meals. Please not this restaurant is not open on Sundays.

Our Review Of the Docklands Museum

The docklands museum is situated in the Dock area of London near to the Isle of Dogs and Canary Wharf. Because of this the best way to get there is via the Docklands light railway, a small monorail which covers the whole of the docklands area. I came by car and this was a big mistake, I got lost through the maze of roundabouts and narrow streets and apart from expensive car parks there was no nearby street parking, I ended up parking some way away and walking back to the museum.

The Docklands Museum is situated inside an old Warehouse which used to be used for tea sorting in its heyday. It has been fully modernised inside but retains the old world feel of beamed ceilings and wooden staircases which I thought was a nice touch.

There are plenty of other things to see and do in the area such as visiting one of the many restaurants or bars, shopping in the Canary Wharf Shopping Mall or simply walking along the docksides and admiring the many vessels there.

The museum covers three floors of the warehouse and you are guided to start your visit from the top floor and work your way down. All floors can be accessed via stairs or lift.

I wasn't sure what to expect from my visit and wondered if I would find it of interest. I needn't had worried. The museum is what I call human sized i.e. it isn't so large that you lose interest halfway round. There are plenty of seats along the way to have a quick rest and while you rest there are often short videos nearby to keep you entertained and informed.

I would say that in general younger children may find it a little dull but for them there is a special area for the under 12's on the ground floor called Mudlarks, which is more of an interactive gallery to promote understanding and learning through play and exploration.

I enjoyed my visit to the museum and found out a lot more about the Docks and how they have helped shape London and continue to change and adapt to the modern world.

Back to top of this Docklands Museum Page