The Kew Bridge Steam Museum is now known as the London Museum of Water and Steam.

The museum contains the largest collection of pumping engines in the world which can be seen still working at various times throughout the year.

The engines are truly impressive and none so more than the 100 inch engine which was built in 1869 and was last used to pump water at Kew in 1958. 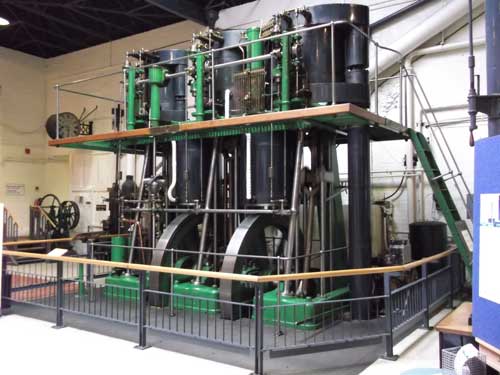 The museum celebrates not just the fantastic engineering feats of the last 200 years but also shows an important change in social London history.

The growing population of the city required more and more need for fresh clean water and in turn this finally eradicated the many water borne diseases which plagued London during the 19th century.

The Kew Bridge Steam museum is for everyone, from those interested in good old fashioned engineering and steam driven machines to those interested in social history. But most of all it is a lot of fun, after all who doesn't like great big shiny hissing machines, everyone who I saw on the day was enjoying themselves and this included people of all ages.

The Museum Exhibitions and Facilities

The Kew Bridge Steam Museum is a rather unique museum in London and I can guarantee that you will see nothing else like it anywhere else in the city.

The buildings themselves are in their own right rather splendid and walking through them you really do get a real sense of what it must have been like working in these cathedrals to steam.

For those of you who are steam engine enthusiast i will list some of the engines you can see on your visit to the museum:

Other Attractions and Displays

The Kew Bridge Steam museum also contains a "Water for Life" gallery which is an interactive gallery which tells the story of London's Clean water supply right back from roman times when the city was first developed.

This gallery is great fun for the kids as there are lost of things to do to keep them interested including a trail of things to find around the museum.

During the summer months on Sundays there is an opportunity to ride on London's only Steam railway which circles the museum buildings outside.

There is a small book shop for those who are interested in the history of steam engines and London in general.

The Stokers Café is situated at the entrance of the Museum, it is accessible without having to enter the Museum and is open every day from 11am – 4pm

What can I say about the Kew Bridge steam Museum other than I loved it and that surprised me. This is because I must admit to thinking that this would be a rather dull experience designed mainly for engineering geeks and as I had little interest in steam engines felt that this museum would not be for me, I was so wrong.

As soon as I entered the first exhibition space, "The Water for Life gallery" I was instantly enthralled and engaged. The display was fantastic and very imaginative. One whole wall was covered entirely by household gadgets from the past to the present which use water. So there were washing machines, basins, toilets and boilers of every description stuck to the wall like a giant mosaic of machinery.

Moving on to the Steam Hall the first thing which his me was the smell of hot oil and the sounds of clunking and hissing engines. I hadn't expected to see actual moving working engines on my visit so this was a nice surprise.

The engines were being taken care of by a young man wearing a boiler suit and flat cap and who seemed to be moving from one engine to another with an oil can in his hand, topping up various joints and gauges to keep things working smoothly.

The engines in this hall have all been collected and saved from scrap and represent a diverse range of engine design. They are all rather attractive also which is testament to the pride the engineers of the past had in their engines.

The two other areas within the museum contain the largest of the engines in the collection and when I say large I mean Huge. Not being an expert in these things i cannot say much about these machines in detail but I will say they were extremely impressive and quite awe inspiring.

The largest of the machines is housed in a building which covers three floors. The engine can be viewed from these floors via ironwork steps which I would say is for the more interested and adventurous among us. In fact children are not allowed up into these floors if they are shorter than 4ft as there is a danger of falling over the iron railings. I did take the plunge and tackled the stairs even though I have no head for heights, I'm glad I did though
as it really does give you a fantastic view of the engine.

All in all I really enjoyed my visit to the Kew Bridge Steam museum it was both fascinating and fun and I'm sure you will never find yourself anywhere near such fantastic, grandiose and powerful machines like these anywhere else in one place. Well worth a visit on your trip to London.

Back to the top of this Kew Bridge Steam Museum Page