The Kirkaldy testing Museum in London could almost be described as a secret museum. But it is there if you know where to look.

I am guessing that it is kept fairly quiet for the simple reason that it is essentially a museum about a material testing machine and the family which invented it. Not appealing to a wide audiences taste I am guessing, but I think it is a shame to keep this small museum so under wraps. 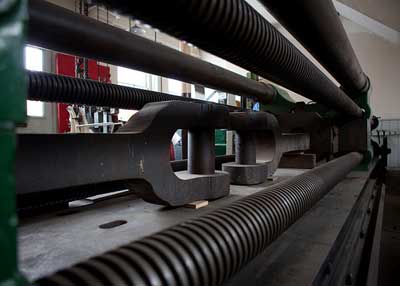 The museum is housed in a building which was specifically built to hold the giant testing machine and which was built in 1874. The Kirkaldy company started after the founder member, David Kirkaldy resigned from his job at the ship works and designed his own testing machine to test the strength of materials used in large construction works.

The machine was famously used to test samples of the metal after the Tay bridge collapsed to try and ascertain the cause of the disaster.

The museum is only open on the first Sunday of every month between 11am-3pm .

There is no need to book, simply ring the bell of the door in the back street on Price Street.

You will be given a guided tour which lasts about an hour.

The museum is FREE but donations are welcome

The testing machine is 47 feet 7 inches long, weighs some 116 tons, and so as you can see needed its own designed building.

In 1960 after the testing machine was no longer in use and was about to be scrapped by the new owners of the building, when it was saved by a passing professor who bought the building and the machine and turned it into the Kirkaldy testing museum.

The museum has since increased its collection of other pieces of testing equipment.

This small museum is run by volunteers, many of whom are enthusiasts of restoring and maintaining historical pieces of scientific equipment . These may not be people who you come across every day, so a visit to the museum will provide not only a visual experience but also allow you to meet and talk to these fascinating people.

Back to the top of this Kirkaldy Testing Museum Page