The London Canal Museum sits nestled in the back streets behind the hustle and bustle of the busy Kings Cross Station in London. This is a little gem of a museum needs to be discovered and explored by more visitors to our great city, It's too good to be missed.

The museum is housed inside an original Ice warehouse on the side of the Regents canal where ice was imported from Europe and transported to the warehouses ice storage pit via horse drawn canal boats. The huge dark Ice pit can still be seen in the centre of the museum.

The museum tells the story of the canals which run through London and around the country and which played a major role in England's Industrial revolution.

It also tells the story of the Ice trade and in particular the man who became a famous ice importer and ice cream maker during the late 1800's, Carlo Gatti.

10am to 4:30pm Tues - Sun and bank holiday Mondays.
Check with the London Canal museum for Christmas Opening Times.

The Museum Exhibitions and Facilities

The London Canal Museum isn't a large exhibition and your visit will probably take you around an hour. The museum is situated inside an original warehouse where Ice was stored before being shipped to buyers.

The museum is over two floors of the warehouse and has been laid out to represent both the trade which was carried on there i.e. the trading in Ice and the working canals of the Victorian period.

The main floor contains a life-sized narrow boat called the Coronis which was a working boat which also doubled as a family home. You are able to walk through the boat to see just how small a space whole families had to live in.

Around the walls you will examples of the equipment used by the warehouse to load and unload the boats as they brought in their cargos of ice as well as plenty of photographs from the period.

In the centre of the room is a giant hole which went down into a ice pit where the ice was kept before it was shipped off to buyers.

On the main floor you will also see a exhibition all about Carlo Gatti the famous ice importer and maker of ice cream. Examples of how ice was bought by shop keepers to keep their goods fresh and the various uses for ice including the fashion for ice cream during the Victorian period.

You are able to walk outside to Battlesbridge Basin on the regents Canal and see both residential and some working canal boats still in use today. This gives you more of a sense of the canal community and how they lived.

The second floor can be accessed via stair case and lift and was originally home to the stables of the horses which pulled the boats along the canals. This floor is mainly dedicated to showing the lives of the horses and the work they carried out in London during the canals heyday.

A reconstruction of a real life stable as well as some of the equipment to care for the horses is on display. The floor also contains models of some of the different types of vessels which were used to move goods around London and the country.

At the time of visiting there was a continuous film showing the history of the working canals and an original film in black and white with musical accompaniment showing a journey through London's canals.

The London Canal museum does not have a cafe but there is a vending machine available for hot and cold drinks. There is however a rather charming gift shop which sold everything from books about the canals to painted tin mugs and narrow boat ceramic money boxes.

We visited the London canal museum during a cold January Sunday afternoon and although just five minutes down the road Kings cross station was a mass of rushing people, the museum was fairly quiet. This could both be down to the fact that it was a cold winters day and also i fear because the museum is tucked away down a narrow side street.

Personally I liked the fact that it was situated within the original warehouse buildings right next to the canal it served. It really added to giving you a sense of the lives of the people who worked on the canals during the Victorian period.

Once inside it was lovely and warm and you are greeted by a friendly member of staff at the admissions desk who will explain to you a little about the museum and hand you a small guide. 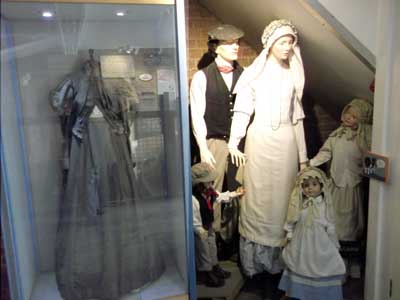 I had always wanted to go on a canal boat myself and so I was delighted to see that I could do just this via a life-sized boat inside the main hall. Personally I can't believe anyone person could live on a boat like that let alone a whole family, but hey, they did.

In the centre of the museum is a giant black hole which was an ice pit. It is now empty but for some reason many visitors gained some delight in tossing coins into it to hear the loud clanging they made. I suspect the museum doesn't mind the small extra income for the constant clangs.

I exited the London Canal museum at the rear of the building to go out into the Battlesbridge basin for awhile to take a look at some of the canal boats moored up there at the time. It is important to remember that these are not part of the museum and are people's homes, so gawping into boat windows isn't really the thing to do.

Up on the second floor I sat down and spent about 15 minutes watching old scratchy films about canal life which I must admit was fascinating not only to see the canal boats at work but also how London had changed.

A stable stall takes up one end of the top floor and contains a life-sized model horse, with sound effects as well. Every now and again you hair a snort and the banging of hooves on the floor and the rustling of hay. I thought this was very good especially as you come to realise that horses really did live up here on the second floor. How did they get up there, I hear you ask? Well there was a special horse ramp which led up from the lower floor and which can still be seen there today.

I enjoyed the London canal museum very much, so much so that I couldn't resist wanting one of the painted tin mugs which were on sale in the museums shop. I guarantee that you will want to purchase some memento of your visit too.

Back to the top of this London Canal Museum Page