The Museum of the Order of St John tells the fascinating story of this famous organisation from its origins in Jerusalem over 900 years ago, to today's modern St John's Ambulance service.

he museum is based between two sites which are both nearby to each other. 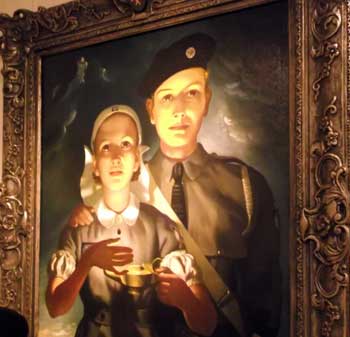 The main museum is housed within St John's Gate, which was once the entrance to an ancient Priory. A very short walk away you can also visit the Priory Church with its twelfth century Crypt and beautiful garden.

About The Order of St John and the Museum

The museum today is arranged over several gallery spaces that trace the history of the Order.

After the first crusade in Jerusalem, a group of knights took vows of poverty and service and established a hospital there to care for sick pilgrims travelling to the Holy Land. They were called Hospitallers but later took on a military role to defend their territories.

Over the ensuing centuries more crusades and wars followed, and with continued defeats to the Muslim armies, the Order of St John had to flee and move base on several occasions, from Rhodes, to Malta and Rome.

Today, the Order of St John has expanded and continues its charitable and caring work throughout the world. In the nineteenth century a revival of interest in England lead to the order moving into St John's Gate and in 1877 the St John's Ambulance service was founded.

The building of St John's Gate itself has a fascinating history. Following the dissolution of the monasteries by Henry VIII the building went on to be used for many various purposes, with several claims to fame:

My Review of the Museum of the Order of St John

We received a very warm welcome from the attendant when we stepped through the entrance of St John's Gate. He explained the different gallery spaces to us and also directed us to the Church and Crypt just up the road.

Unfortunately we were too late for the guided tour, but there was a very good free video showing some of the highlights that we had missed of the interiors in the upper rooms.

In the galleries themselves, it was fascinating to see items such as suits of armour and cannon balls from the 15th century, plus a beautiful 17th century carved model of the Church of the Holy Sepulchre in Jerusalem.

The displays are clear and well organised and I thought the galleries were organised well, which made it easy to understand how the Order developed and adapted over the centuries.

There is so much history to this place and to the Order itself, that although a small museum, you can spend a lot of time here. Next time, I would definitely try to attend one of the guided tours, which last for 80 minutes and are reasonable price and would certainly help bring this fascinating story to life.