The science museum London gallery called "Making The Modern World" can be found on the ground floor of the museum. It contains items from the last 250 years which have made a big difference to all of our lives.

The gallery contains items both big and small and items that we give little thought to but which have had a big impact on our modern way of living.

It is an interesting gallery and probably one that many of us can relate to personally. This is because many of the items may still be familiar to us, or at least you may remember them from your childhood. I know that I cam across many items which looked familiar and that I remember my Nan owning and using.

The "Making The Modern World" gallery in my opinion is one of the most fascinating and as such you can spend quite some time in.

This video gives a brief over view of the gallery space.

Highlights in the Making The Modern World Gallery

The following items caught my eye in particular and so I have highlighted them here. However this is just my small choice of items, there is simply so much in this gallery that it is impossible to give you a complete picture of what sort of exhibits are here. You will discover your own favourites as you walk round.

Technology in everyday life 1880 -1938 - Along one side of the gallery there are long glass cabinets simply crammed with items of everyday use, which were new to people over a hundred years ago and which made their lives so much easier than ever before. Many of these items will be common to us know as they were the fore runners of many of our own modern gadgets.

For instance you will see items such as:

Stephenson's Rocket - The science museum London is currently displaying this famous steam engine. It is one of the first items you will see as you enter the gallery. 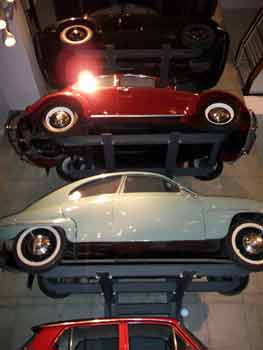 The ""Rocket" played a major role in the way steam engines looked and how they could be used effectively to carry both passengers and good safely.

The Rocket was built in 1929 and its design proved to be so good that it became the blue print for all steam engines which followed right up until the last steam engines were built in the UK in the 1960's.

Cars - Cars have undeniably played a major role in the lives of every human being all over the world and they have changed the way we live in so many ways and have opened up travel to the masses. As such the gallery could not be complete without some examples of some of the best and most popular car designs.

The model T was the first car which became affordable for the masses and during 19 years of production over 15 million were sold in the UK. 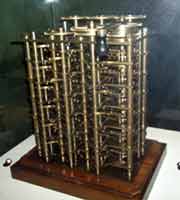 Babbage's Difference Engine - This item may look like nothing more than lots of cogs and levers and you may walk by it without realising what it is. It is in fact an early trial calculator.

The engine was put together in 1832 by Charles Babbage, who designed the engine to perform a set amount of processes and mechanise the process of error-free mathematical tables.

It led onto a more complex machine which would be able to perform any number of different problems and was the fore runner of today's modern computers.

My review of the gallery

This is a large gallery which is situated on the ground floor and as such probably gets visited by everyone who visits the museum. It certainly was very crowded and Noisy when I visited but because it is a large room with a very high ceiling it was perfectly pleasant to wander around at leisure.

This galley is packed with so many famous and familiar items that I did spend quite some time here. Looking at all the household items in the cabinets was really fun as I could pick out items which we still use today and which looked so clunky back then. Who would have thought putting a piece of bread between two metal cages and sending and electric current through them to toast the bread would catch on.

This was another gallery within the science museum London which you have to make sure you look up for. Above our heads hang a life sized jet airplane and a by plane and rising up the wall at an improbable angle were a line of real cars. These large imposing objects make this gallery in the Science Museum London look very impressive as you enter and they make you want to explore the gallery more I think.

One of my favourite galleries in the science museum London and one I'm sure will be the favourite of many others.


Back to top of this Science Museum London Page

Back to main Science Page